Effort. Spirit. Pride. When Andy Jeffers was in elementary school in Johnson City, Tenn., he heard that mantra almost daily from his sixth grade English teacher who doubled as his little league baseball coach.

“Henry Joy was my teacher and coach and he was a huge influence in my life,” says Jeffers. “I still remember what ‘ESP’ is all about – Effort, Spirit and Pride – and keep it close to me, even after 31 years.”

And he definitely lives it. Jeffers, who owns and runs Knoxville-based Sports & Entertainment Media, LLC wouldn’t have any idea about how to give less than 100 percent of effort. He is blessed with an indefatigable spirit and is definitely proud of the business his father built which shows in the many relationships he has cultivated with clients, all of whom he also considers friends.

Born in Boone, N.C., Jeffers parents, Lyn and Marilyn, moved to Johnson City to raise sons Andy and J.J. An avid athlete, Andy participated in sports throughout his youth and teenage years, playing for Science Hill High School, then in junior college at Muscle Shoals (Ala.), and at Columbia State (Tenn.). He then headed back to his home state and the University of Tennessee to finish his undergrad degree in Communications in 1999.

Once his baseball-playing days were done, Jeffers, under the tutelage of Barry Rice and Link Hudson who are part of UT’s Athletic Broadcasting Department (VFL Films), learned how to write and edit, produce and also developed his skills as a videographer. By the year 2000, when he graduated from UT, he had landed a full-time position with the athletic department.

While at Tennessee, Jeffers produced “Inside The Orange,” as well as features for various coaching shows, while also editing sales elements for video boards at football, basketball and baseball games. He worked with Tennessee from 1998 into 2004, building strong relationships with CBS, ESPN, Comcast Sports, FOX Sports when those networks covered UT sporting events.

Jeffers moved on to Beyond Media in Knoxville in July of 2004 where he worked on various shows for the History Channel, Comcast and DIY, just to name a few. And then, when his father fell ill in July of 2005 and was diagnosed with a brain tumor, his entire world was forever altered.

Lyn Jeffers was truly a marketing mastermind and an innovator in the world of NASCAR. He worked to bring sponsors into the sport back in the ‘80s and when ESPN began covering NASCAR in 1981, they enlisted his help. When CBS first installed a camera in a race car in 1979, which was a new and innovative way to give the viewer a bird’s eye view of what was happening in the cockpit, Lyn Jeffers’ brilliant mind went to work in the late 80’s.

Lyn realized there was no sponsorship or advertising inside the car. If there were in-car cameras, shouldn’t somebody be advantage of some pretty amazing revenue opportunities? Not long after that, Jeffers’ brainchild of selling sponsorships with the in-car cameras came to fruition and thus, Lyn Jeffers & Associates, as it was originally called, really took off.

When Lyn fell ill in the summer of 2005, Andy left Beyond Media, asking if he could fill in for his father on the NASCAR beat. Without hesitation, Andy did just that, thinking at first it would only be temporary.

When Andy and his family were told that Lyn had brain cancer, Andy went to work full-time for Sports and Entertainment Marketing, as it was called then, working first for FOX and NBC coordinating the placement of in-car cameras from 2005 through 2006. During that time, Lyn passed away in December of 2006. 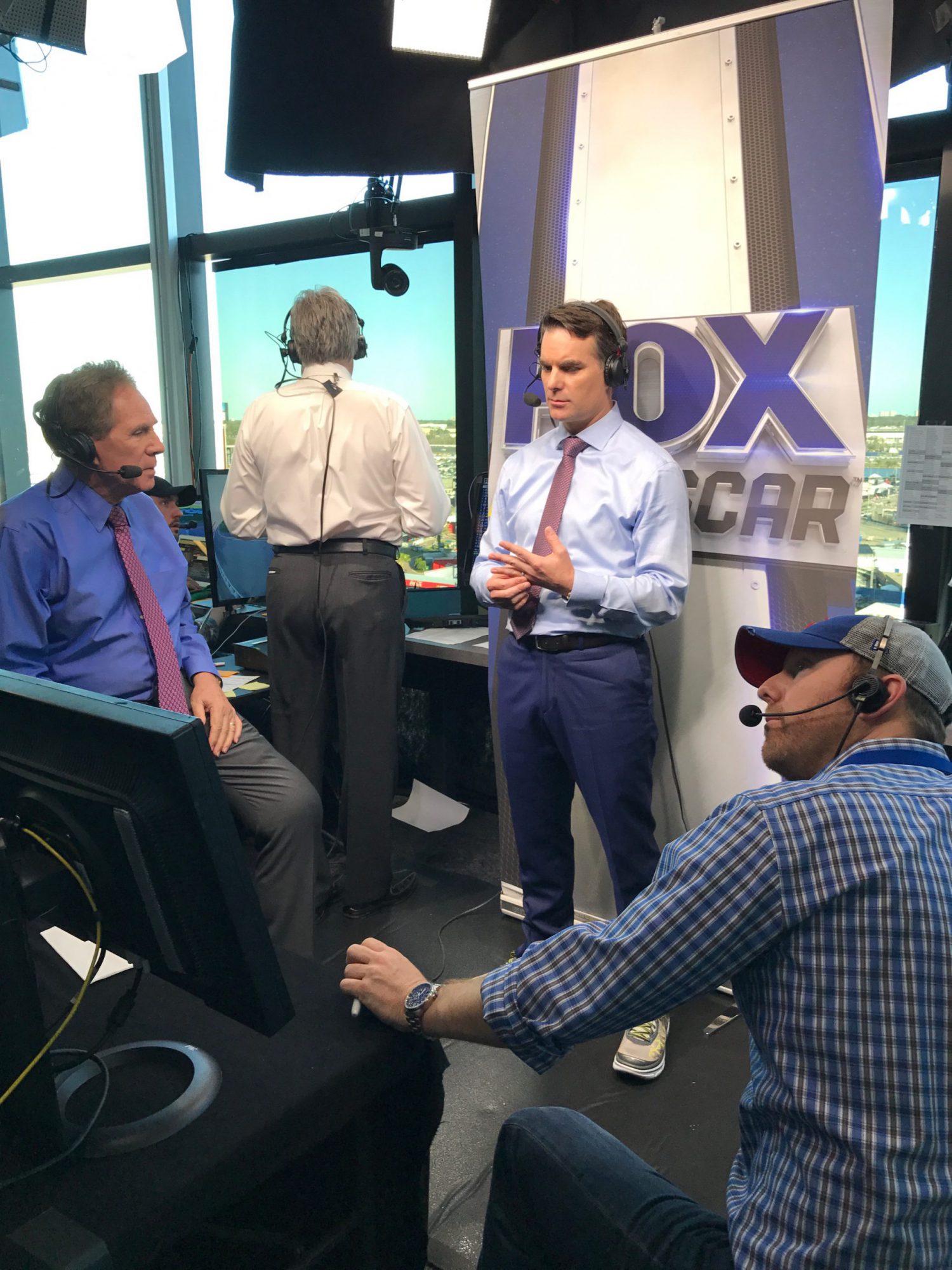 “It was the hardest thing I’ve gone through in my life,” said Andy. “My dad and I were so close… it was definitely a difficult time.”

In 2007, Andy changed the company’s name to Sports & Entertainment Media, LLC and since then has worked with FOX, TNT, ESPN, and NBC’s sales departments, handling and selling in-car cameras for both NASCAR Cup and Xfinity Series races. He has also continued to work with the University of Tennessee’s athletic department, helping assist produce the video boards for football and men’s and women’s basketball.

Never one to be complacent, Andy continues to expand his horizons professionally. He has also worked with the NFL Network, produced shoots for GAC and worked the concert venue for AXSTV. In October of 2011, Sports & Entertainment Media, LLC broke into the music world with a full-length concert production of Hot Trio LIVE. In May of 2012 came the premier of Hot Trio Live at the Bijou Theatre. He has also produced and edited music videos for local bands and in the summer of 2014, Sports & Entertainment Media, LLC expanded to the world of live streaming events. As the growth of live streaming has hit the forefront of reaching the world, Jeffers has tried to ride the ever-changing “wave” the industry and technology presents. 2015-2017 saw Sports & Entertainment Media live streaming events for bands like The Avett Brothers, Andy Wood, Ramajay Intercoastal, Steel Union, The University of Tennessee, and others. In 2016 Sports & Entertainment Media, working with Catch Multimedia, Inc. won an Southeastern Emmy under the category of “Technical Director” for the live stream of Cheerwine’s Legendary Giveback IV, with The Avett Brothers. 2018, the production of “Andy Wood Live at The Bijou” took Sports & Entertainment Media into digital distribution of iTunes and Amazon Music. “The full concert film was the next step for us and we expanded even more into the fingertips of fans”, Jeffers said. 2019 saw the interest and expansion of time-lapse photography and taking flight with honing the skill set of flying a drone for video purposes.

2020 was rough on everybody in the production/broadcasting world. The COVID pandemic really put a halt on every dimension of life. “This has been a year that we will never forget. From a business front, music tours have halted and the scramble has been felt by so many”, Jeffers said. “We thrive and work off people, honestly this has been a challenge when you base your business off relationships and handshakes.” Sports & Entertainment Media did reach out to produce a music fundraising project to stream for Second Harvest Food Bank and assist the great folks at The Joy of Music School when their Spring Recital was forced to be “attended” virtually. “We just wanted to help anyway we could and have the tools to create and reach folks in the community.”

A sports fanatic, he loves his Tennessee Vols and Chicago Cubs with a passion (went to all seven games of the 2016 World Series) and loves any kind of music. A proud Northeast Tennessean, there’s absolutely no place like home for Andy, who constantly marvels at his home state, which is so rich in beauty, history and music.

And while sports and work are important to him, organizations such as Victory Junction Camp, Stand Up 2 Cancer, St. Jude Children’s Hospital, Second Harvest Food Bank and Joy of Music are very near and dear to his heart.

One thing that is certain about Andy Jeffers, whether it concerns business, sports, music, or production… he puts his whole heart into it. With Effort, Spirit and Pride always in ALL ways.